We are hugely grateful to our patrons. These are passionate, highly successful people who raise our profile and ensure our cause is noticed far and wide. Patrons give their time, expertise and influence freely and in many cases they make generous financial contributions. 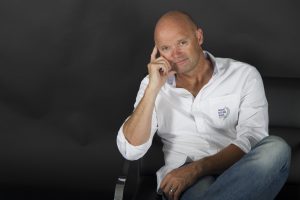 Mark says “My time as a kid and then teenager at the West Wight Swimming Club was one of the most influential associations of my life. My experience there, from the day coach Trevor Collins invited me back age 11 or 12 I think, has formed me both physically and mentally in such positive ways. And not just the competition side – raising funds to build the place, creating monthly newsletters (no computers!) to raise money for the team, travelling to far away competitions sleeping on floors to save money…. Incredible memories and no doubt as important an education as the school part”

Mark has competed in many of sailing’s leading events including the Transat Jacques Vabre and the solo Mini Transat, but really made his name in the sport by masterminding Briton Ellen MacArthur’s successful Vendée Globe race in 2001 when she finished second.

He then oversaw her breaking the solo circumnavigation of the world record in 2005, taking the sport to a wider audience than ever before, both in their native United Kingdom, but also around the world.

Mark is also a very keen cyclist, swimmer and skier, and is married with two children.

Jamie and Susie Sheldon of Kings Manor Farm, have been supporters of the Centre since their children were young.

Their family have learned to swim at West Wight and have gone on to be involved in both triathlon and modern pentathlon. The whole family continue to support our many events and activities.

Jamie was the instigator of our Community Supporter Scheme and he and Susie kindly hosted the launch event at Kings Manor.

Jamie and Susie are keen sailors and also enjoy badminton, tennis and triathlon (slowly) as well as being keen supporters and spectators of almost any sport.

Darren grew up in Totland and started his swimming career at West Wight Swimming Club, and retains links with the Centre and the swimming club.

Darren has swum in two Olympic finals and won multiple medals at European, Commonwealth and World level. He spent ten years in the top 10 in the world with two of those years at number 2.

As a coach Darren has coached swimmers of all ages and has had success at National and International level. He has had swimmers break British and Cayman age group records as well as having swimmers attend the junior European championships and win medals at the World Island Games.